The port is currently in operation and the first container ship has successfully docked at the quay, paving the way for flourishing maritime trade.
CLI is proud of the successful implementation of the project. The ACCROPODE™ II technology has once again distinguished itself by a completion within the deadline and to the required level of quality, with the single-layer protection of the main breakwater in the new commercial port of Tema in Ghana (West Africa).
In its capacity as supplier of the ACCROPODE™ II technology, CLI provided technical assistance throughout the different stages of the project; 3558 metres of breakwaters were protected with around 70,000 m3 ACCROPODE™ II units.
During the design phase, CHEC performed the 2D and 3D stability tests and called on CLI’s technical assistance on site in order to check the coherency of the placing process developed on the physical scale model in the laboratory with the recommended ACCROPODE™ II unit placing procedure.
Eight technical assistance inspections were performed on site during the construction phase, with a view to providing advice on ACCROPODE™ II unit fabrication and placing procedures, constant remote monitoring of works progress, and support with worksite preparation and choice of equipment required.
The 2 m3 units were placed using a hydraulic shovel equipped with a rotating head. An underwater visualisation system called ECHOSCOPE™ was also used to allow placing operations 24/7. A striking fact during the construction phase was that the breakwater was subjected to severe overtopping, which did not damage or affect the stability of the armour facing that was being built. Thanks to CLI’s technical assistance, CHEC masterfully completed the construction of the breakwater in less than three years. 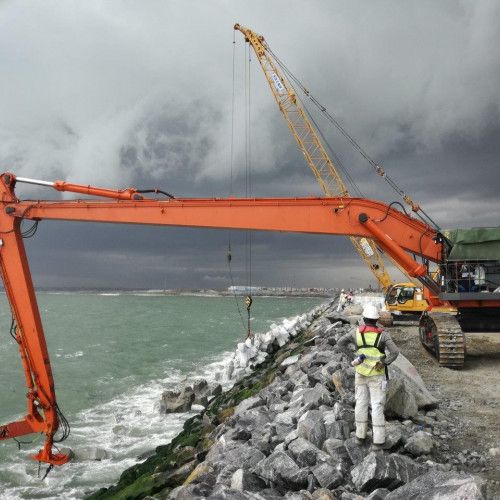